Imagination is a perfect partner to observance. You can’t have one without the other.

I’d like to explore this a bit with you by first looking at imagination itself then seeing how it fits in so perfectly with observance. Then, as always I’ll throw in a few tips on how to strengthen your imagination and apply it in very practical, everyday ways.

Have you noticed that as you’ve grown older, your dreams, (daydreams and night dreams) have become more complex, containing far more detail than when you were a kid? I love this. I find that the more detailed and sensory a dream is, the more intriguing and inspiring it is. So where does this extra detail and complexity in our dreaming come from? From our observations. From the mass of sensory experience we’ve stored up over the entire course of our lives so far.

Why am I talking about dreaming in an article about imagination? Let me explain.

Imagination and dreaming are both quite different things and yet they’re very similar. They’re like sisters. They share a lot of common features like conjuring and creating new experiences, events, places, people, creatures and all kinds of things where there were none before and all of this in the sanctuary of our own minds. They inspire, they help us make sense of different aspects of our lives, they guide and they entertain. But this is the best part, they come from the same mother; Observance.

I’m not going to go into a lot of depth about the philosophy and the immense depths of imagination. Not until I know more about it. But here I’ll discuss and explore imagination in its simplest and possibly most profound form, filling the gaps between observations to create a whole and interactive reality.

I’ve said before that “Where observance creates the bones and structure of our reality, imagination is the muscles and skin.” Let me unpack that statement a bit for you.

When you observe something you only observe it in part because perhaps you can’t see the whole thing, can’t smell it, can’t hear it, can’t reach out and touch it, don’t want to taste it, or can only observe it in part because of physical or time restraints. There are gaps in our observations. But even though we can’t observe it fully, we can still fully appreciate the whole thing we’re observing.

By filling in these observation gaps with imagination. Jean-Jacques Rousseau famously said, “The world of reality has its limits; the world of imagination is boundless.”

These aren’t the actual succulents I chose to observe but they’re so cute, aren’t they?

You can do this little exercise right now to see this effect in action:

What you’ve just done is taken your observations which could never have given you the full picture and filled them out with your imagination to give you a much greater sense of the reality of that object. To use that quote from before, you’ve added muscles and skin to your observations.

Imagination – A.K.A Assumptions, Hope or Fear

You can see how this is something that you do all the time. These imaginations are often known as assumptions, and as my sister Terra pointed out to me, in the context of time they’re known as hope and can also be known in a negative sense as fear. They might not be fully correct but rarely does that actually matter much. Most of the things around us that make up our reality have little to no effect on how we conduct our daily lives. There are, however some things that have a huge impact. Relationships, food, philosophy, religion, danger, delight, etc. Each one of these has a certain element of observation and a balancing element of imagination (assumption, hope or fear). 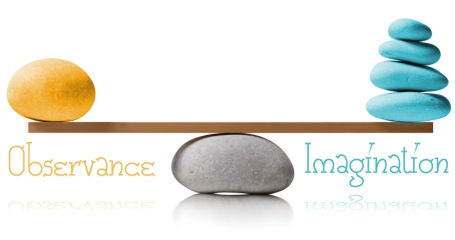 When we can see the difference between observance and imagination and their roles in making up our reality, we can start thinking about the balance we set between our observations and our imaginations (assumptions). Clearly, the more we observe, the less we have to imagine to fill the gaps. The more observant we are the clearer our reality becomes and the closer it becomes to truth.

Imagination is huge. I’ve only just touched on one aspect of it here. My hope is that with a greater understanding of what’s happening in our minds to make up our reality, the more prepared and willing we will be to pursue truth in observation and freedom in imagination and to know when one is being overpowered by the other. Imagination, like Observance, is a skill and this skill can and should be built with daily practice.

Let me just finish with an excellent quote by Mark Twain. “You can’t depend on your eyes when your imagination is out of focus.”